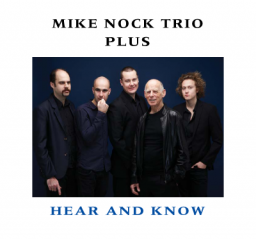 Released in January 2012, Hear and Know is the latest recording from Mike Nock’s Trio Plus. The CD recently won Best Jazz Album at the 2012 Australian Independent Recording awards ( AIR )

John McBeath in The Australian Jan 7 2012

‘This is a stellar quintet of four younger players led by a grand old master whose compositions and arrangements here are like a 21st-century re-invention of the legendary works of Gil Evans for Miles Davis’s famous quintet of 1963 to 1965.’

‘…highlights Nock’s continuing development as a player and composer and the vibrancy and strength of some of the younger players on the Australian jazz scene.’ Read more >>>>

Ben, James and I have been making music together since we met at Sydney Conservatorium’s jazz studies program some ten years ago. A couple of years ago we began playing quartet gigs with Karl and in January this year we invited Ken to join us. With the trio touring Japan in mid September and Ken winning the James Morrison “Generations in Jazz Scholarship” in August we decided it was time to go into the studio. Its been a real pleasure making music with this awesomely talented group of young musicians and I hope you’ll get a sense of that while listening to the album …….

‘After Satie’ from the CD, featuring Gerard Anderson‘s photo slideshow of the recording session