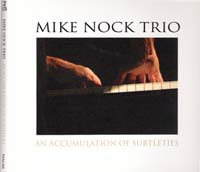 The trio’s first release An Accumulation of Subtleties, a two CD set showing different facets of the trio’s music was released in 2010 on FWM records. Awarded Best Australian Contemporary Jazz Album at the 2011 Bell Awards the CD has attracted many strongly positive reviews from Australia, Japan, USA and New Zealand.

“Apart from the subtlety mentioned in the title, this double CD from Sydney pianist Mike Nock’s trio exhibits innovative exploration and far-reaching diversity. The title track opens with a minimalist, classical-style piano in a gentle, out-of-tempo theme, soon taken up by Ben Waples’s double bass, with effects gradually added by James Waples’s brush work. Intensity builds towards the final chorus with the piano marching grandly to a stately conclusion of solitary high treble chords. The other four tracks on disc one, all originals, display a similar approach, tempo-less at times, texturally expressive, and all with Nock’s instinctive compositional flair. Three of the six tracks on disc two are by other composers and two of those, House of Blue Lights and The Gypsy feature the strongest grooves of the collection although Nock’s Beautiful Stranger employs a soft bossa beat and some exuberant piano and bass solo work. The Gypsy opens in strong rhythmic mode and drives into a rousing piano solo, a fast-running skilful bass sequence and forceful four-bar exchanges between piano and drums. Throughout the album’s performance, recorded live in 2008, there are two standouts: fist, Nock’s consummate, artful playing across a miscellany of moods; then the impressive way the trio integrates organically into a seamless yet discursive ensemble.”

From the liner notes: The music on An Accumulation of Subtleties happened spontaneously at the end of a long intense session at the Sydney Opera House Studio. Maybe because of this we feel these tracks capture something of the essence of the trio’s shared approach to improvisation, as we were able to play with no agendas except to allow the music to freely come through.

The live session is culled from a weekend at Sydney’s Sound Lounge, part of SIMA’s ongoing series. When the possibility of recording the trio came up shortly after SIMA installed their new piano in the room, we decided it was too good an opportunity to miss as we always enjoy playing there. There was much more music played on both sessions than is on the CDs, but believing brevity to be the soul of wit, we’ve chosen a selection of what we feel to be the choicest morsels.
Enjoy!

Disc 2: Live at the Sound Lounge