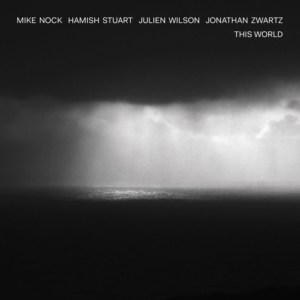 In December 2018 pianist Mike Nock, drummer Hamish Stuart, saxophonist Julien Wilson and bassist Jonathan Zwartz played an intimate gig in the basement of a cosy inner-Sydney restaurant. Despite having enjoyed established relationships with each other in a variety of formats, this marked their ﬁrst performance as a quartet. The four-way chemistry was instantly obvious. It was Nock’s ﬁrst gig in six months after being severely injured when hit by an SUV while crossing the street. The joy and vitality of his return to live performance was palpable, and it was clear to all that this quartet should continue. That first night the band played standards, but it was agreed that everyone would write new material to create an album of all original music. In early May 2019 the quartet reconvened for a performance for the Sydney Improvised Music Association sponsored by the Freedman Foundation at Sydney’s 301 Studios, where some of the new compositions were aired. Earlier that day a grant from the Australia Council was approved, and Sony Studios was booked for late June. The result of this chain of events is the stunning This World: the debut album from what is a new quartet (albeit one that has been brewing for a while), featuring nine fresh compositions contributed by all members.

Mike Nock has played with everyone from Coleman Hawkins to Michael Brecker, and has released a plethora of critically acclaimed albums under his own name on many international labels. He has served as a mentor for and inspiration to generations of Australian musicians. Like Zwartz, he is a Kiwi who has long called Australia home.

Jonathan Zwartz and Hamish Stuart form one of Australia’s great musical partnerships. For 30 years they have run the Starﬁsh Club together in various venues along Sydney’s eastern beaches and are the first-call rhythm section for a who’s-who of the Australian music industry and international touring acts. Individually, their resumes serve as a roll-call of international stars; together their simpatico and hook-up is legendary.

Melbourne saxophonist Julien Wilson has been awarded almost every major accolade in Australian jazz, including the National Jazz Award, The Freedman Fellowship for Jazz, an APRA/AMCOS Art Music Award, and a “Bell” Award for Australian Jazz Musician of the Year. Since the mid-’90s he has maintained strong relationships with many Sydney musicians, collaborating regularly with bands led by Stu Hunter, Mike Nock and Jonathan Zwartz.